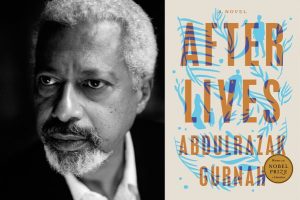 Winner of the 2021 Nobel Prize in Literature, Abdulrazak Gurnah’s Afterlives is a sweeping, multi-generational saga of displacement, loss, and love, set against the brutal colonization of east Africa. “A novel that gathers [those] meant to be forgotten, and refuses their erasure.”

When just a boy, Ilyas was stolen from his parents on the coast of east Africa by German colonial troops. After years away, fighting against his own people, he returns home to find his parents gone and his sister, Afiya, abandoned into slavery. Hamza, too, returns home from the war, scarred and with nothing—until he meets the beautiful, undaunted Afiya. As these young people live and work and fall in love, their fates knotted together, the shadow of a new war on another continent falls over them, threatening once again to carry them away.

Abdulrazak Gurnah was born in Zanzibar in 1948 and teaches at the University of Kent. He is the author of ten novels and a number of short stories. The theme of refugee disruption runs throughout his work. Paradise was short-listed for the Booker Prize and the Whitbread Award, and By the Sea, was a Los Angeles Times Book Prize finalist. The Nobel Prize in Literature 2021 was awarded to Gurnah “for his uncompromising and compassionate penetration of the effects of colonialism and the fate of the refugee in the gulf between cultures and continents.”

Tickets to attend in person start at $18. Virtual passes are $15.
Both virtual passes and tickets to the lecture can be purchased at pittsburghlectures.org/abdulrazak-gurnah/