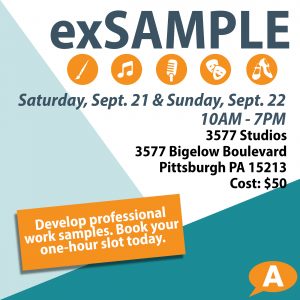 “Pittsburgh artists – do you have a headshot? What about high-quality photos, video, or audio of your work? If you don’t, you could be missing out on opportunities, including funding, exhibitions, and press coverage.

BUY TICKETS ADD IT
Click to bookmark this listing

“Pittsburgh artists – do you have a headshot? What about high-quality photos, video, or audio of your work? If you don’t, you could be missing out on opportunities, including funding, exhibitions, and press coverage. Normally it would cost hundreds or even thousands of dollars to hire media professionals to create these assets for you. But on September 21 & 22, GPAC is bringing photographers, videographers, and audio pros together in one building to work with ALL genres of artists – visual and

“Pittsburgh artists – do you have a headshot? What about high-quality photos, video, or audio of your work? If you don’t, you could be missing out on opportunities, including funding, exhibitions, and press coverage. Normally it would cost hundreds or even thousands of dollars to hire media professionals to create these assets for you. But on September 21 & 22, GPAC is bringing photographers, videographers, and audio pros together in one building to work with ALL genres of artists – visual and performance artists, fashion designers, actors, poets, writers, and more. At the end of your session, you can have all the materials you need to increase your visibility and reach. AND it’s affordable!”

If time, money, or access has limited you from creating professional work samples, exSample is here to help. Artists of any genre can book a slot to work with media professionals to develop high-quality examples of their work for use when applying for grants, fellowships, and residencies. Register for an hour-long session located at 3577 Studios and leave with professional work samples. Please note, if you are scheduling an audio recording appointment, please meet at Tuff Sound Recording at 201 N. Braddock Avenue #301 in Pittsburgh.

You will have the option to receive either the raw documentation of your work for $50 or to have post-production done for a total of $250.The estimated value for professional work samples ranges from $600 to $2,000.

Post Production tasks may include, but are not limited to:

Developing, toning and exporting of images
Minor retouching as needed
Re-sizing and reformatting, as needed
Controlling and adjusting levels of lighting or sound
Minor equalizing where needed
Labeling images, tracks, files
Register for an exSample Session on Saturday or Sunday.

exSample matches various genre artists with reputable professionals in order to best showcase the work of the artist, or, in the case of some performing arts, the artists themselves. Artists will leave their session with professional work samples, which can be used for their applications, promotional and marketing materials.

Participants will register for one-time slot with photographers, videographers, or sound engineers in their chosen field. At the end of your session, you’ll leave with professional 2-D or 3-D visual samples, such as headshots, videos, or recordings.

7926_DeborahHosking-med.jpgDeborah Hosking
Deborah Hosking is a writer, filmmaker, photographer and fine artist, with awards to her credit in each of these disciplines. She has written for a wide range of clients, from banks and cars to hotels, restaurants and wine, as well as a number of arts organizations and non-profits. She has several short films to her credit, and her paintings, photographs and video work have been seen in New York, Hong Kong, Paris, Los Angeles, and Prague, as well as Pittsburgh. She holds a BFA from Carnegie-Mellon and an MFA in Film Digital Media from Chatham University.

Eric_A_Smith_Headshot.jpgEric A. Smith
E.A. Smith (Photographer/Producer) started doing photography and producing as a child growing up in the Historic Hill District or Pittsburgh, PA. Although he has enjoys doing both, a focus on photography is what drove his career. He has worked in theatre for over ten years learning everything from light design, to stage management, all the way to producer and company management.
In 2009 he used his passion for photography, and his knowledge from theatre to create CREW Productions LLC for the purpose of providing platforms for artists and community members to have their voices heard to new audiences. CREW has produced a number of short films, web series, live showcases, and documented a number of artists through interviews, photography, and recordings. Currently CREW produces four different podcasts, and works in Pittsburgh and nationally continuing with documentation and build platforms.

Randall_Coleman.JPGRandall Coleman
Randall Coleman is a photographer and videographer native to Pittsburgh. He has a Masters of Science Degree in Media Arts and Technology and a Bachelors of Arts Degree in Journalism, both from Duquesne University. As a photographer and videographer, Randall focuses on capturing the character of Pittsburgh and its citizens. He has also traveled to Israel on behalf of the Cultural Trust and Classrooms Without Borders to photograph Israeli culture. His photographs from Israel were included in the 2017 First Night and the January 2018 Cultural Trust Gallery Crawl. In 2017, he was a Three Rivers Arts Festival Emerging Artist. His recent work includes the documentation of Women of Visions oral history as well as the concert series Pittsburgh’s Very Own.

sarah-huny-young.jpgsarah huny young
sarah huny young is a creative director and visual artist primarily documenting and exalting Black womanhood and queer communities through portraiture and video. Framing her subjects as her co-curators, she often shoots on-location across the country in personal, intimate spaces of the subject’s choosing. huny received the Advancing Black Arts in Pittsburgh grant in 2016 to execute AMERICAN WOMAN, a portrait and documentary series about Black American women, and was named one of the most influential African-Americans of 2017 by The Root; “Who’s Next in Art” 2018 by The Incline; and one of “12 People to Meet in Pittsburgh 2018” by Pittsburgh Post-Gazette. Currently, huny owns and operates design agency Supreme Clientele, is a founding and executive advisory board member of Carnegie Museum of Art’s Carnegie Art Associates, and curates and DJs cultural events as part of a residency at Ace Hotel Pittsburgh and Allsummr.

HP_SOY_SOS_PROMO_PIC.jpgHerman Pearl
Herman Pearl (Soy Sos) is the head engineer and owner of Tuff Sound Recording, as well as the sound designer and co-founder of PearlArts Studios / Staycee Pearl dance project. Through PearlArts, Herman creates soundscapes to serve as a component to contemporary dance. As a sound designer, Herman’s repertoire includes a wide variety of projects and collaborators. His work has been featured in various independent films and documentaries, video games, and advertising. He has designed soundscapes for numerous choreographers. He has collaborated with many visual artists to create installations and touring exhibits. He has recorded and produced work for a plethora of recording artists across genres and techniques. Herman has performed, created, and recorded his own music for over 25 years.