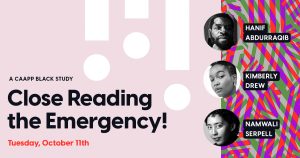 “Disaster requires acts of imagination…emergency can be, and almost always is, a moment of emergence.” —Alicia Schmidt Camacho, Yale Professor of Ethnicity, Race, and Migration

In our first event, writers, cultural critics, and influencers Hanif Abdurraqib, Namwali Serpell, & Kimberly Drew will share work and a discussion in virtual creative conversation, with an audience Q&A to follow.

Hanif Abdurraqib is a poet, essayist, and cultural critic from Columbus, Ohio. His poetry has been published in Muzzle, Vinyl, PEN American, and various other journals. His essays and music criticism have been published in The FADER, Pitchfork, The New Yorker, and The New York Times. His first full length poetry collection, The Crown Ain’t Worth Much, was released in June 2016 from Button Poetry. It was named a finalist for the Eric Hoffer Book Prize, and was nominated for a Hurston-Wright Legacy Award.  His first collection of essays, They Can’t Kill Us Until They Kill Us, was released in winter 2017 by Two Dollar Radio and was named a book of the year by Buzzfeed, Esquire, NPR, Oprah Magazine, Paste, CBC, The Los Angeles Review, Pitchfork, and The Chicago Tribune, among others. He released Go Ahead In The Rain: Notes To A Tribe Called Quest with University of Texas press in February 2019. The book became a New York Times Bestseller, was a finalist for the Kirkus Prize, and was longlisted for the National Book Award. His second collection of poems, A Fortune For Your Disaster, was released in 2019 by Tin House, and won the 2020 Lenore Marshall Prize. His newest release, A Little Devil In America (Random House, 2021) was a winner of the Andrew Carnegie Medal and the Gordon Burn Prize, a finalist for the National Book Critics Circle Award and the Pen/Diamonstein-Spielvogel Award . In 2021, Abdurraqib was named a MacArthur Fellow. He is a graduate of Beechcroft High School.

Hanif Abdurraqib is a widely published poet, essayist, and cultural critic from Columbus, Ohio. His newest release, A Little Devil In America (Random House, 2021) was a winner of the Andrew Carnegie Medal and the Gordon Burn Prize. In 2021, Abdurraqib was named a MacArthur Fellow. He is a graduate of Beechcroft High School.

Kimberly Drew (a.k.a. @museummammy) is a writer, curator, and activist with a passion for innovation in art, fashion, and cultural studies. Drew received her B.A. from Smith College in Art History and African-American Studies, with a concentration in Museum Studies. An avid proponent of black spaces, Drew first experienced the art world as an intern in the Director’s Office of The Studio Museum in Harlem. Her time at the Studio Museum inspired her to start the Tumblr blog Black Contemporary Art, sparking her interest in social media.

Since starting her blog, Drew has worked for Hyperallergic, The Studio Museum in Harlem, and Lehmann Maupin. She has delivered lectures and participated in panel discussions at the New Museum, Art Basel, Moogfest, The Schomburg Center for Research in Black Culture, and the Brooklyn Museum. Her writing has appeared in Glamour, W, Teen Vogue, and Lenny Letter. She also serves as a board member for Recess Activities, Inc.

Drew is currently the Social Media Manager at The Met, was honored by AIR Gallery as the recipient of their inaugural Feminist Curator Award, was selected as one of the YBCA100 by the Yerba Buena Center for the Arts, and selected as one of Brooklyn Magazine’s Brooklyn 100. You can follow her at @museummammy on Instagram and Twitter.

Namwali Serpell was born in Lusaka. Her first novel, The Old Drift (Hogarth, 2019), won the Anisfield-Wolf Book prize for fiction “that confronts racism and explores diversity,” the Arthur C. Clarke Award for science fiction, the Grand Prix des Associations Littéraires Prize for Belles-Lettres, and the L.A. Times’ Art Seidenbaum Award for First Fiction. It was short listed for the L.A. Times’  Ray Bradbury Prize for Science Fiction, Fantasy & Speculative Fiction and long listed for the Center for Fiction First Novel Prize, the Nommo Award for Best African Speculative Novel, and the Historical Writers’ Association Debut Crown. It was named one of the 100 Notable Books of 2019 by the New York Times Book Review, one of Time Magazine’s 100 Must-Read Books of the Year, and a book of the year by New York Times Critics, The Atlantic, NPR, and BuzzFeed.

She is a co-recipient of a 2020 Windham-Campbell Prize for fiction (with Yiyun Li). Her short story, “Take It,” was a finalist for the 2020 Sunday Times Audible Short Story Award. In 2014, she was chosen as one of the Africa 39, a Hay Festival project to identify the most promising African writers under 40. In 2011, she received a Rona Jaffe Foundation Writers’ Award. Her first published short story, “Muzungu,” was selected for The Best American Short Stories 2009 and short listed for the 2010 Caine Prize; she went on to win the 2015 Caine Prize for “The Sack.” Her  novel, The Furrows, will be published in September of 2022 with Hogarth.

She is a Professor of English at Harvard University. She was Assistant, then Associate, Professor of English at the University of California, Berkeley from 2008-2020. Her  work of literary criticism, Seven Modes of Uncertainty, was published in 2014 by Harvard University Press. Her book of essays, Stranger Faces (Transit Books, 2020), was long listed for a Believer Book Award for Nonfiction and a finalist for a National Book Critics Circle Award for Criticism.

Registration is Free and Open to the public: https://www.crowdcast.io/e/caappclosereading

* Event durations (if noted) are approximate. Please check with the presenting organization or venue to confirm start times and duration.