Call for Work: Undefeated: Canvas(s)ing the Politics of Voter Suppression 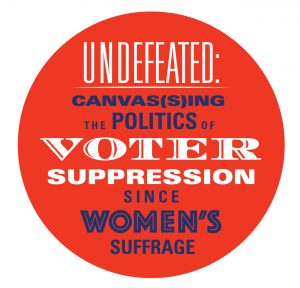 UNDEFEATED: CANVAS(S)ING THE POLITICS OF VOTER SUPPRESSION SINCE WOMEN’S SUFFRAGE

About: On the occasion of the 100th anniversary of the ratification of the 19th amendment to the U. S. Constitution (granting women the right to vote), and the 55th anniversary of the Voting Rights Act of 1965 (enforcing voting rights for racial minorities), the WVU Libraries are planning a major art exhibition for fall 2020 at the Downtown Campus Library around the political process with special attention to efforts to suppress the votes of women and minorities since 1920. [Voter suppression is a strategy used to influence the outcome of an election by discouraging or preventing specific groups of people from voting. It is distinguished from political campaigning in that campaigning attempts to change likely voting behavior by changing the opinions of potential voters through persuasion and organization. Voter suppression, instead, attempts to reduce the number of voters who might vote against a candidate or proposition.]

An advisory committee consisting of regional scholars, creatives and professionals are collaborating to curate the educational content and select the artwork organized in themes, attached.