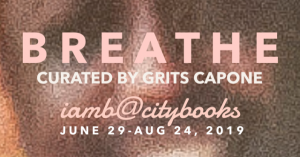 BREATHE is a new exhibit curated by Grits Capone (Corey Carrington) opening June 29.
Breathe is centered on telling stories of freedom, joy, happiness, power, and individuality through the lens of Blackness. In a society that profits off of the pain & destruction of Black bodies & minds, Breathe is a repudiation of this status quo, ultimately offering a glimpse into a reality yearning to be brought into existence. Submissions are open to Black/African Diasporic artists only. Deadline for submission: June 1, 2019. To submit email DeeperThanGritsStudios@Gmail.com.

IAMB takes its name from a poetic meter consisting of one unaccented and one accented syllable. Noted for its similarity to a beating heart, the tiny iamb is often considered the primary building block of Western storytelling. When repeated five times, iambic pentameter stretches to ten syllables—the average length of time a lung can last without inhaling. Though they use different media, all artists use their hearts and lungs to express universal truths, yet many do so without voicing a word. Consequently, Iamb is a gallery space that centers human experience and the unspoken stories that investigate when and where and how we live.

Spotlighting emerging, marginalized, and under-represented artists from the Pittsburgh/tri-state/ neighboring Appalachian region, the gallery’s purpose is to promote artistic expression in relation to experience and narrative; to foster dialogue between artists and audiences across race, gender, sexual orientation, geographic, and socio-economic boundaries; and to reinforce the vital bond between literature and art as part of the region’s cultural heritage.

Corey Carrington is an accomplished Poet, Collagist, and Curator from the Northside of Pittsburgh, PA. He received his degree in Communications & Creative Writing from Slippery Rock University in 2011. Assuming the pseudonym of Grits Capone in 2009, Grits has performed at The Shadow Lounge, The August Wilson Center, The Kelly Strayhorn Theater, and Wood Street Galleries among other venues. As a collagist, Grits’ work has been viewed at Social Status, BOOM Concepts, the University Arts Gallery at The Frick Fine Arts Building, and The Greater Pittsburgh Arts Council. Carrington’s main goals as an artist are to demystify & decolonize the world of art. As a ChangeMaker, Corey has worked with Partner 4 Work, Allegheny Youth Development, GTECH Strategies, and Public Allies Pittsburgh in the areas of Workforce Development, Education, Community Engagement, and Non-Profit Management. Corey was the inaugural Emerging Black Arts Leader Apprentice for Contemporary Craft in 2016. In October 2017, Corey, curated his first exhibition, Electric Kool-Aid, at the Brew House Association for the Associated Artists of Pittsburgh. Most recently Corey was been awarded an Advancing Black Arts In Pittsburgh Grant, a partnership of the Pittsburgh Foundation & The Heinz Endowments, to create his debut spoken word album, Watermelanin.